Anatolia and the Near East have long been recognized as the epicenter of the Neolithic expansion through archaeological evidence. Recent archaeogenetic studies on Neolithic European human remains have shown that the Neolithic expansion in Europe was driven westward and northward by migration from a supposed Near Eastern origin [ 1–5 ]. However, this expansion and the establishment of numerous culture complexes in the Aegean and Balkans did not occur until 8,500 before present (BP), over 2,000 years after the initial settlements in the Neolithic core area [ 6–9 ]. We present ancient genome-wide sequence data from 6,700-year-old human remains excavated from a Neolithic context in Kumtepe, located in northwestern Anatolia near the well-known (and younger) site Troy [ 10 ]. Kumtepe is one of the settlements that emerged around 7,000 BP, after the initial expansion wave brought Neolithic practices to Europe. We show that this individual displays genetic similarities to the early European Neolithic gene pool and modern-day Sardinians, as well as a genetic affinity to modern-day populations from the Near East and the Caucasus. Furthermore, modern-day Anatolians carry signatures of several admixture events from different populations that have diluted this early Neolithic farmer component, explaining why modern-day Sardinian populations, instead of modern-day Anatolian populations, are genetically more similar to the people that drove the Neolithic expansion into Europe. Anatolia’s central geographic location appears to have served as a connecting point, allowing a complex contact network with other areas of the Near East and Europe throughout, and after, the Neolithic.

Omrak et al., Genomic Evidence Establishes Anatolia as the Source of the European Neolithic Gene Pool
Posted by Awale Ismail at 4:38 AM No comments:

Uniparental data from Eritrea on the way?

Genetic, archaeological, and paleoanthropological data indicate that all major migrations of anatomically modern Homo sapiens (AMHS) originated in Africa and recent data suggest that key dispersals emerged from Horn of Africa. Thus, Horn of Africa and neighboring regions on the Arabian Peninsula are critical to our understanding of the worldwide dispersal of humans out of Africa. There is a dearth of information available on key populations in this region, particularly in southern Arabia. The proposed study combines fieldwork, original laboratory and computational analyses, international collaborations, and innovative outreach programs to reconstruct population movements critical in the dispersal of humans. The project will provide powerful tests of the best current hypotheses of human migrations and generate new data to design future hypotheses. The project builds on past success in reconstructing simple migration histories (Europe and the New World) and serves as a model to determine the utility of genetic variation patterning and phylogenetic methods to reconstruct more complex migration histories. Eight hundred DNA samples from linguistically and geographically diverse populations in Eritrea (Horn of Africa) and Oman (southern Arabia) will be assayed for genetic variation across the mitochondrial genome and the Y chromosome. These data will be used to formulate new hypotheses as well as to test the following hypotheses: 1) a southern dispersal route out of Africa, 2) migration and back-migration between Horn of Africa and Arabia, and 3) expansion of the Semitic language family. Broader impact. 1) An important component of the proposed project is an expedition to collect blood samples in Eritrea (previously unsampled) and Oman (one published study). Genetics workshops will be taught in Eritrea and Oman and necessary laboratory equipment will be donated to each host institution. Aliquots of all collected samples will be shared with Eritrean and Omani colleagues. The proposed collaboration will allow African and Arabian collaborators to retain control of their own genetic resources as well as develop and direct independent research in the future. Eritrean colleagues have already developed a project to investigate resistance to malaria in Eritreans, a subject of national priority. 2) Furthermore, a unique program has been developed in which University of Florida journalism and communications graduate students will participate in University of Florida Department of Anthropology research projects in order to gain hands-on laboratory experience and create a media product for inclusion in their graduate portfolio. This program will have maximum impact because it provides training to the individuals charged with communicating current scientific research to the general public.

All of the jibber-jabber about figuring out the dispersals out of Africa via modern sampling (a flawed exercise as neither modern Horn Africans nor modern Arabians are "isolated descendants" of the "Proto-Eurasians" who left Africa and their descendants who migrated to Eurasia) aside; this generally seems incredibly interesting if it's legit. All I and a friend who brought this to my attention could find on this though were grant proposals and them seem to have gotten their funding meaning this study should be out at some point from what I gather.

Would be fantastic to have extensive mtDNA data on Afars, Sahos and Tigres though and see how similar the former two populations turn out to Somalis in that respect...

Mulligan et al., Human Dispersals Out of Africa: Mitochondrial and Y chromosomal Genetic Analysis of Eritrean and Omani Populations
Posted by Awale Ismail at 4:37 AM No comments:

We extend the scope of European palaeogenomics by sequencing the genomes of Late Upper Palaeolithic (13,300 years old, 1.4-fold coverage) and Mesolithic (9,700 years old, 15.4-fold) males from western Georgia in the Caucasus and a Late Upper Palaeolithic (13,700 years old, 9.5-fold) male from Switzerland. While we detect Late Palaeolithic–Mesolithic genomic continuity in both regions, we find that Caucasus hunter-gatherers (CHG) belong to a distinct ancient clade that split from western hunter-gatherers ~45 kya, shortly after the expansion of anatomically modern humans into Europe and from the ancestors of Neolithic farmers ~25 kya, around the Last Glacial Maximum. CHG genomes significantly contributed to the Yamnaya steppe herders who migrated into Europe ~3,000 BC, supporting a formative Caucasus influence on this important Early Bronze age culture. CHG left their imprint on modern populations from the Caucasus and also central and south Asia possibly marking the arrival of Indo-Aryan languages.


Expect a blog post soon enough at the main blog on this exciting paper's interesting new finds...
Posted by Awale Ismail at 1:17 AM No comments:

The Bene Israel Jewish community from West India is a unique population whose history before the 18th century remains largely unknown. Bene Israel members consider themselves as descendants of Jews, yet the identity of these ancestors and their arrival time to India are unknown, with speculations on arrival time varying between the 8th century BCE and the 6th century CE. Here, we characterize the genetic history of Bene Israel by collecting and genotyping 18 Bene Israel individuals. Combining with 438 individuals from 32 other Jewish and Indian populations, and additional individuals from worldwide populations, we conducted comprehensive genome-wide analyses based on FST, PCA, ADMIXTURE, identity-by-descent sharing, admixture LD decay, haplotype sharing and allele sharing autocorrelation decay, as well as contrasted patterns between the X chromosome and the autosomes. Bene Israel individuals resemble local Indian populations, while at the same time constituting a clearly separated and unique population in India. They share genetic ancestry with other Jewish populations to an extent not observed for any other Indian population. Putting the results together point to Bene Israel being an admixed population with both Jewish and Indian ancestry, with the genetic contribution of each of these ancestral populations being substantial. The admixture took place in the last millennium, about 19-33 generations ago. It involved Middle-Eastern Jews and was sex-biased, with more male Jewish and local female contribution. It was followed by a population bottleneck and high endogamy, which has led to increased prevalence of recessive diseases in this population. This study also provides an example of how genetic analysis advances our knowledge of human history in cases where other disciplines lack the relevant data to do so.

Posted by Awale Ismail at 5:45 AM No comments:

The arrival of farming in Europe around 8,500 years ago necessitated adaptation to new environments, pathogens, diets, and social organizations. While indirect evidence of adaptation can be detected in patterns of genetic variation in present-day people, ancient DNA makes it possible to witness selection directly by analyzing samples from populations before, during and after adaptation events. Here we report the first genome-wide scan for selection using ancient DNA, capitalizing on the largest genome-wide dataset yet assembled: 230 West Eurasians dating to between 6500 and 1000 BCE, including 163 with newly reported data. The new samples include the first genome-wide data from the Anatolian Neolithic culture, who we show were members of the population that was the source of Europe's first farmers, and whose genetic material we extracted by focusing on the DNA-rich petrous bone. We identify genome-wide significant signatures of selection at loci associated with diet, pigmentation and immunity, and two independent episodes of selection on height.

Posted by Awale Ismail at 2:35 AM No comments:

All Africans have some Eurasian admixture?

Characterizing genetic diversity in Africa is a crucial step for most analyses reconstructing the evolutionary history of anatomically modern humans. However, historic migrations from Eurasia into Africa have affected many contemporary populations, confounding inferences. Here, we present a 12.5x coverage ancient genome of an Ethiopian male (‘Mota’) who lived approximately 4,500 years ago. We use this genome to demonstrate that the Eurasian backflow into Africa came from a population closely related to Early Neolithic farmers, who had colonized Europe 4,000 years earlier. The extent of this backflow was much greater than previously reported, reaching all the way to Central, West and Southern Africa, affecting even populations such as Yoruba and Mbuti, previously thought to be relatively unadmixed, who harbor 6-7% Eurasian ancestry.

Link to study
Posted by Awale Ismail at 10:47 PM 2 comments:

Maykop culture's people: The source of the Caucasian-like ancestry in the Yamnaya?

As David mentioned over at Eurogenes, we'll be seeing what some peoples of the Maykop culture   looked like genomically as Oxford University recently donated Maykop samples to the Reich lab. 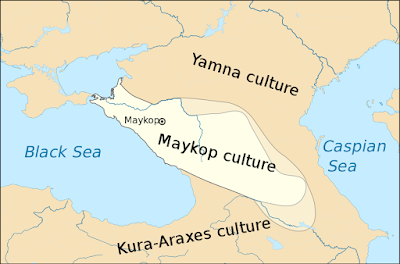 As has been stated in the past on the Anthromadness blog; Haak et al. 2015 found what looked to be a West Asian ancestry carrying element in the Yamnaya Pontic-Caspian Steppe pastoralists and characterized it as Armenian/Cacuasian-like.

From what I understand, some in the genome blogging world have connected this element to the illusive "Teal component" which looks be a mixture between Ancient North Eurasian-related ancestry and West Asian / Near Eastern ancestry.

Only time will tell...

Link
Posted by Awale Ismail at 3:49 AM No comments: